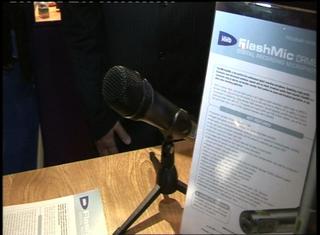 Way back on Friday Sep 9th 2005 at IBC Amsterdam, the UK company of HHB launched a great device for radio reporters. Basically, they have built a flash recorder into the base of a Sennheiser microphone, the same looking type which is marketed by Sennheiser as a wireless model. Instead of the transmitter, HHB has put in a flash-recorder into the same housing.

On the bottom are connected for a pair of headphones and a USB jack to the laptop. You can transfer recordings to the laptop at 90 times faster than real time, and there is no quality loss in the transfer since you're copying a digital file. The flash memory unit cannot be taken out (and lost), but you can get plenty of audio in - 3 hours at 48K linear, 18.25 hrs using the MPEG-1 Layer 2 standard at its lowest bitrate. I purchased a unit in 2006 and have found the 3 hour memory capacity to be fine for ordinary reporting. If you were using it to make a documentary, you'll need to dump content to a hard disk on a laptop. HHB say they have no plans to make the memory card removable in this model.

You do the editing of an item on the laptop, not on this device. The beast came out in Jan 2006 at a price of 699 pounds sterling in the UK (VAT extra) and 999 Euros (VAT extra). At the time we complained that the price was on the expensive side.

A press release on May 1st 2007 indicated that the retail price has now dropped to 529 pounds ex VAT in the UK, partly because of volume production and the drop in the cost of internal memory. I asked HHB in London whether this meant they would consider putting 2 GB instead of 1 GB, but the answer was that the feedback from clients indicated that 1 GB was enough for most purposes. Personally, I'd prefer 2 GB so I could use it for longer periods without having to dump to a Hard-disk. But I do more documentary work.

The audio quality of the recordings is great. For very noisy environments, there is also a cardioid version of the same device (the DRM85-C is the same price) which is far more directional. For my purposes, the omni-directional version is fine.

Unlike some other competitors, this Flashmic works on two standard penlight (AA) cells. I use the 2650 mAH capacity rechargeable cells from Duracell and get around 8 hours of recordings without a pause. Always have a couple of batteries spare in case. When the batteries go, they tend to fade rather suddenly.

I plug a pair of closed-type headphones into the base to monitor the sound and spot popping. The casing is rugged and well designed against hand-noise.

Things to bear in mind though;

- There is no audio buffer to allow the unit to be in standby and still capture the start of an important statement. Wouldn't be that practical anyway - you can't remote control this Flashmic since it is built into the base of the microphone.

- No line-in to the recorder. It's a flash microphone.

- Only Mono. No stereo versions

- Flash memory is not removable.


As well as broadcasters, this device might interest some podcasters too who want to interview famous people. There is a social factor here. Somehow the HHB looks better than the M-audio or a mobile phone stuck under someone's nose. They treat you like a professional because the device looks familiar. 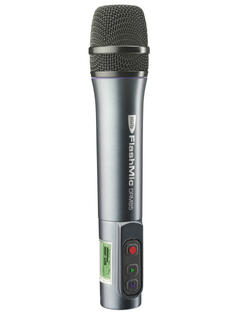 What to get in touch? Use Retaggr Below

I don't like robot spam and so I've installed this solution to bridge the gap.