Panasonic steals the IBC Show for me 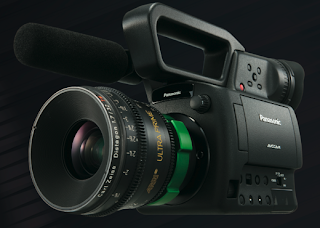 Woah - so glad I waited before picking out a new camera. Just come back from the introduction of a new flashbased camcorder from Panasonic called the AF101. They say its about 70 percent ready and will come onto the European market by December 2010 for a price just under 5000 Euro (excluding local VAT taxes). The AF101 is designed to answer back to the Canon D5 Mark II DSLR challenge. Frankly, because DSLR has not solved a lot of artefact problems and has really poor sound arrangements, I have decided to wait before chucking out what I have now and going for DSLR. I have decided not to go the DSLR route after what I saw tonight. The final model is going to look less boxy it seems, what's in Amsterdam are engineering samples.

I do a lot of interviews and I cannot keep switching cards every 12 minutes because the card has reached a 4 GB file maximum. Canon is a still's camera company, and it is only now that they seem to be waking up to the needs of the videographer. On a closer look, frankly I can't wait for Canon to get it right two or three years down the road. Those cameras were designed to shoot great stills and a bit of video on the side for Web reportages. They do a great job in that. But trying to shoot videos the way I am used to will require too many work arounds, especially as a single shooter.


In a very funny but factual presentation in the NEMO Science centre in Amsterdam this evening, Us film and Video Producer, Barry Green took us though a washing list of what DSLR's cannot do without extra attachments. The horror stories of the work arounds with DSLR, rang very true. I have been disappointed that neither Sony or JVC have stepped up to the plate. Both have very lack-lustre stands at this year's IBC 2010 in Amsterdam. So Panasonic seemed to have got it right this time.

From the Panasonic Specs

The AF101 uses a Micro Four Thirds digital single-lens or cinematic lenses such as prime lens with a conversion adaptor, as well as professional audio input (XLR), giving it the degree of flexibility that professionals require. The camera can record video in full HD (1080i/p)/720p formats including 1080/24p native mode with Full HD Variable Frame Rate (VFR)*2 function. The video can be recorded on the bigger capacity SDXC memory cards in professional high quality PH mode (up to 24Mbps). Two SD card slots allow relay recording from one SD (SD / SDHC / SDXC) card to another to give large recording capacity of up to 12 hours in PH mode or 48 hours in HE mode.

The camera recorder is equipped with professional interfaces , including HD SDI output, XLR audio 2ch (48 V phantom power source compatible) inputs. Time code recording feature is also available to deal with professional video operations, something missing on all the DSLR's I have seen so far.
Posted by Jonathan Marks at 9/10/2010 11:09:00 pm

What to get in touch? Use Retaggr Below

I don't like robot spam and so I've installed this solution to bridge the gap.